Architectural diagrams. Too stylised to be drawings, too imprecise to be plans, and too flat to be models. So what exactly are they…? 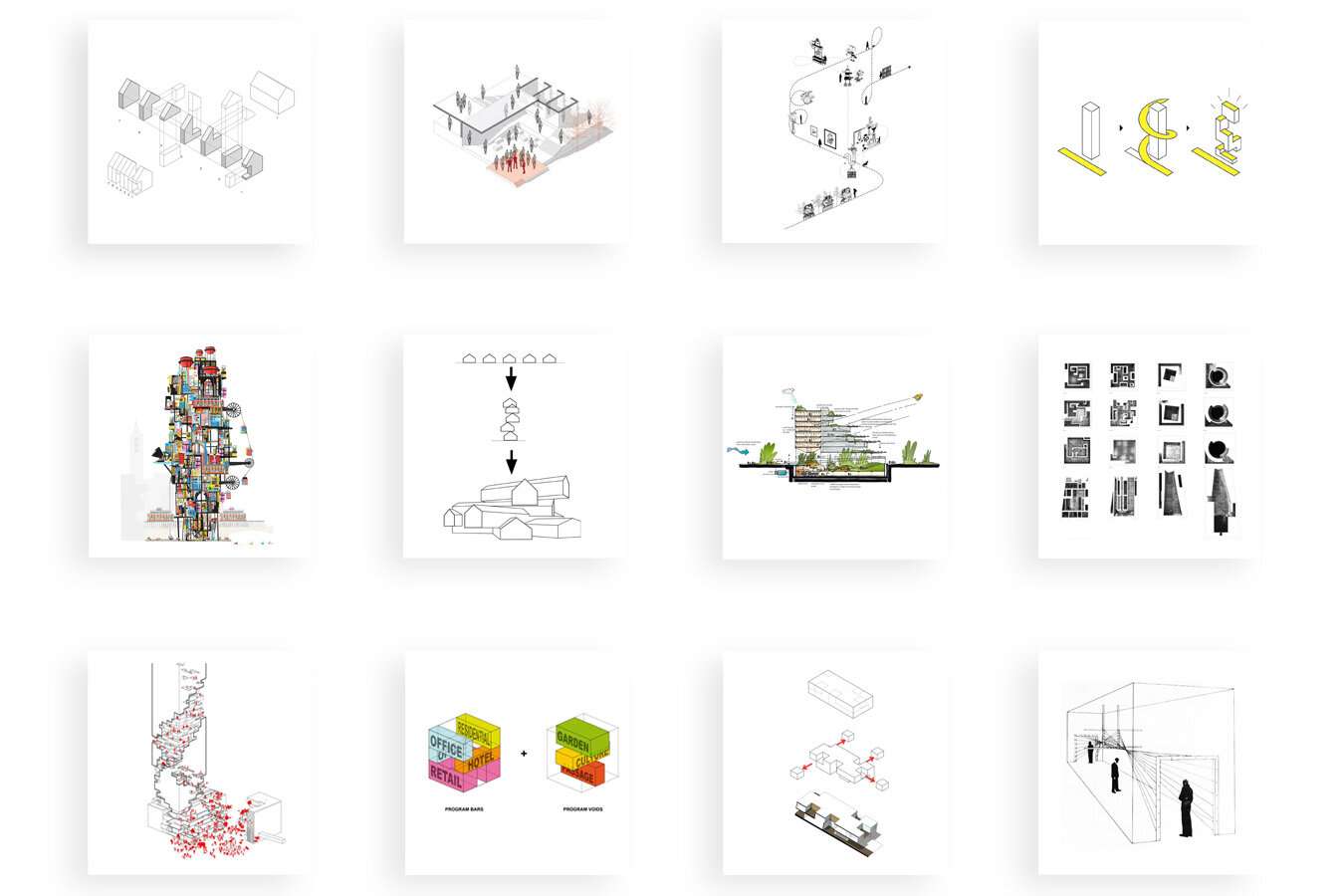 Architectural diagrams. Too stylized to be drawings, too imprecise to be plans, and too flat to be models. So what exactly are they?

What is a diagram?

Diagrams represent ideas in visual form. They are two-dimensional (although they can show three-dimensional objects) and may contain text, shapes and lines; the word diagram literally means ‘marked out by lines’ in Greek. They have existed for thousands of years, though of course they have become more sophisticated over time.

Today we use three main types of diagram. Quantitative diagrams (such as bar graphs and pie charts) illustrate data sets, and tend to be the first ones we encounter in school. Conceptual diagrams (like flowcharts and Venn diagrams) show relationships between items, while schematic diagrams (like exploded diagrams and subway maps) are best described as simplified, abstracted pictures.

Architectural diagrams tend either to be conceptual or schematic.

What is an architectural diagram?

Architectural diagrams help to clarify a building, relationships between elements of a building, or a process connected to a building. They have no unified appearance but they distil unwieldy, hard-to-understand concepts into discrete, easy-to-understand images.

They do this with visual symbols which can be considered all at once, unlike language which must be processed in a linear fashion. The architectural theorist Robert Somol has suggested that diagrams ‘operate precisely between the form and the word’ – which is perhaps why they are so useful for communicating ideas to clients during the building design process.

What is the purpose of architectural diagrams?

Architectural diagrams can be said to have different functions depending on when and how they are used. In the early stages of the design process, they are often used to aid thinking and help architects solve problems.

As a project progresses, they might be used to clarify what is required and as a source of reference for different parties. Throughout and after the design process, architectural diagrams are used to communicate ideas – to colleagues, to clients, and to members of the public.

Fraser Shields suggests that the ‘open, generative’ nature of diagrams ‘frees the designing process from formal considerations for as long as possible’. In other words, diagrams can act as temporary place-markers while we work, which is less restrictive and time-consuming than making formalized plans and drawings.

Diagrams also have the advantage of being able to show different types of information within one image.

In The Architecture of Diagrams, Andrew Chaplin suggests there are 18 kinds of diagram found within architecture. They are:

As the name suggests, planimetric diagrams show plans, i.e. views of buildings or elements of buildings as seen from above. However, they differ from actual plans in that they that are representational only, without precise scales or dimensions.

The below diagram represents the different floor areas of a housing scheme in Paris.

Sectional diagrams show the interior details of a building by ‘slicing’ through it vertically. Again, these diagrams simply represent the building; they cannot be used as instructions.

The below diagram of Anh House by S+Na. – Sanuki + Nishizawa architects illustrates how natural elements such as light, wind and vegetation interact with the building.

This kind of diagram shows an exterior viewpoint in parallel projection, in other words two sides of the same building. Used here to demonstrate alternative design proposals, axonometric diagrams are often used to show design concepts as a whole, and describe the process behind them.

They can be broken down into individual parts, exploded, of present finished schemes.

A programmatic diagram shows the layout of a building and how people will actually use it. The below diagrams for Book House and the Seattle Central Library describe the buildings plan and section circulation in a visual and engaging format.

Contextual diagrams can appear somewhat abstract, as their function is to show how a building relates beyond itself to a wider landscape. Representing abstract ideas of a general notion, these diagrams often contain less detail than others, but nonetheless are an important tool in describing a projects immediate and global surroundings.

Circulation diagrams such show the movement of users around a space. Arguably, they are a subset of programmatic diagrams (above), which show the ways in which people will use a building or area.

The purpose of scaled diagrams is to provide context and help relate one building to another, this can be done through using the scale of everyday human activity, and/or any other commonly known reference.

Sequential diagrams show sequences. What this means in architectural terms is that these diagrams will have several parts, which retain a constant background but show each step of a process (for example planned extensions over several years within the grounds of a school).

Generative diagrams are experimental. They are worked and reworked to help the architect settle on an idea, not unlike the drawings produced during the concept design stage of a building project.

This kind of diagram shows the relationships between elements of a building or space, and can provide a clear illustration of how each space works together and sits within the overall plan.

A Euclidian diagram looks like a grid. It shows buildings, or elements of buildings, arranged so that none can be moved without the adjacent elements being impacted.

Visual field diagrams place lines and arrows inside a ‘cone’ to give an insight into users’ perception of a building or space.

Among the most abstracted of all the types, sensation diagrams aim to convey somewhat intangible effects within a building or space such as light, texture and emotion. Aiming to demonstrate how the human senses will interact and feel.

Made using simple forms, these diagrams show the building as it ought to look when it is built, but without specifications.

Parti diagrams record an architect’s initial response to a site or brief. Since they illustrate early concepts, they are usually drawn by hand. Parti diagrams are perhaps the most abstracted of all architectural diagrams, and may also be considered generative (above).

These diagrams show elements of the building that are separate to the main structure, but which still interact with it in a significant way.

Post-facto diagrams show landscapes, buildings or elements of buildings after they have been constructed. One common example is the 3D fire escape route map displayed in hotel rooms.

How are architectural diagrams used?

The main use of architectural diagrams is to help us analyze what we need to do in order to create an effective building or space. For example, architects may create a series of ‘bubble diagrams’ (which could further be described as planimetric, contextual, generative…) to experiment with the relationship between different spaces in a building.

Or they may sketch sight lines to test what will be visible from where. This is a much more intuitive – and enjoyable! – process for most people than calculating and recalculating dimensions numerically.

Another use of architectural diagrams, as mentioned above, is that they can serve as temporary place-markers that allow a project to move forward. There may be times when precise details are not yet known or necessary, but a diagram allows work to continue with information being added later.

The diagram may be worked up to a formal architectural drawing as the project progresses.

And a final, perhaps self-evident use of architectural diagrams is to communicate our thinking to a client or to members of the public. Sometimes, a picture really is worth a thousand words.

How to draw an architectural diagram

When producing an architectural diagram, keep the following things in mind.

Use shape and line consistently

There are no fixed rules about the shapes and lines that should be used in architectural diagrams, but consistency is essential. Always explain the meaning of each element in your diagram, from a basic box to a dotted edge.

Anyone using your diagram should be able to understand it at a glance. That means including a key within the diagram – not on the reverse, not appended, but alongside the main drawing.

Limit the number of colors

Architects are designers, so this should be obvious! Use the smallest number of different colors required, and use them consistently. Unless you are trying to attract attention – for example in a safety poster – a muted palette is also generally preferable.

The more cluttered your diagram gets, the harder it is to understand. It’s fine to separate different elements into different diagrams if this makes them easier to read – but remember to be consistent with shape, color and line across all of them.

…and don’t be afraid to combine diagrams!

If you have more than one diagram that shows the same part of the building, or a similar process, it’s also fine to merge them into one (as long as you can retain clarity).

A range of software packages is available to help you create architectural (and other) diagrams.

Mistakes to avoid in architectural diagrams

Similarly, when producing an architectural diagram, try to avoid the following common mistakes.

If there is anything that feels confusing or disjointed about your diagram, it isn’t ready. You should understand everything within it yourself before presenting it to a client, or attempting to use it as a guideline for a team.

Never assume that what is clear to you will be clear to a reader. Make sure every single item is explained within your key, and pay particular attention to abbreviations and acronyms.

Busy diagrams immediately tire the eyes (with respect to the designers of Tokyo’s subway map, who have an almighty challenge on their hands, compare it with that of the London Underground). Keep yours as simple as you can.

With that said, make sure your diagram includes all the information that is needed for comprehension. If you go too basic, clients will immediately come to you with questions. Check and check again for missing, incomplete or unexplained elements.

Architectural diagrams, in their many and various forms, sometimes seem to defy categorization – but they are an invaluable tool in the design process. Diagrams are an effective means of communicating ideas to clients and the public; they condense large amounts of diverse information into small fields; and their informality and flexibility allow us to move on with a project when not all the information is available to us yet.

If you keep in mind the golden rules – not too much, not too little, consistency, and a key that adequately explains all the elements – you should find that your architectural diagrams save you time and hassle, and ultimately smooth your passage through a project.

We talk a lot about tablets, pens, and other devices that help you pursue your dream to be a pro digital artist. But here, we

Architectural composition is the organization of elements consisting of various principles…

Is being an Architect Stressful?

Long hours, red tape, awkward clients – why would anyone choose a career in the built environment?