With technology improving exponentially, pen enabled tablets are getting more and more popular by the day. However, that doesn’t mean you should go for just any product that appears on the market. You will undoubtedly want something that is well suited to letting you express your full creativity.

The Wacom MobileStudio Pro 13 is just that. We’ve tried this tablet PC out a few times and have always loved the experience. The ‘Pro’ indicates that it’s made for professionals, and it certainly backs that claim up with its great mix of functionality and extra features. That said, it’s also quite beginner friendly, and you can buy it even if you’re at the beginning of your artist journey, so long as the price tag doesn’t scare you, of course. (We have a much more cost effective options here if it does however!)

In this review, we’ll explore the different aspects of the Wacom MobileStudio Pro 13, allowing you to gauge how well suited it is to your needs. And without further ado, let’s get started!

The Wacom MobileStudio Pro 13 is one of a duo that includes the MobileStudio Pro 13 and 16. The numbers denote the size of the screen in inches, with the 13 having a 13-inch screen. It includes an Intel Core i7 CPU, an Iris Graphics 550 card from Intel, 16GB of RAM, 512GB SSD internal storage, and, one of its best features, Intel RealSense 3D model scanning hardware. 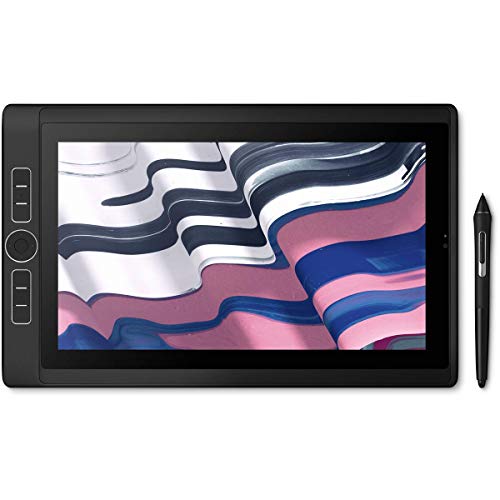 Check Price on Amazon
If you click this link and make a purchase, we earn a commission at no additional cost to you.

Wacom didn’t skimp on any features, and they spared no expense in building a high quality pen enabled tablet. As a result, it isn’t the cheapest one on the market. However, considering how great the specs are, we would say it’s certainly worth the money for those that can afford it. If you want something a little bit cheaper, you might prefer to go for the Core i5 models, with 4GB RAM and 64GB SSD. It also comes with a regular camera with 8MP resolution.

If you want something even more powerful than the MobileStudio Pro 13 (and even more expensive), then you should consider the Pro 16, which has a 16-inch screen, NVIDIA Quadro 4GB GPU, Core i7, 16GB RAM and 512GB SSD, not to mention the same RealSense 3D model scanning camera. The MobileStudio Pro 16 also comes with 8 programmable express keys, as opposed to the 6 contained in the Pro 13.

Who should buy it?

This is definitely a heavy duty pen tablet. It’s not for people who love to play simple graphics games on iPads. It’s more geared to those who would rather build such games. It’s not the kind of tablet you give your child so they can watch their favorite movie. It’s more people who would rather create such movies, especially if they’re of the animated kind. It’s not for taking selfies with all those fancy filters, rather for designing those filters in the first place.

If you’re serious about 3D texture art, or comic book art, or video editing, or storyboarding, or sculpting, or graphic design, or even something like architecture, or are simply serious about learning these things, then this is the perfect tablet for you.

Case – Let’s start with the case. It’s a little bulky, but very well made. Compared to something like the iPad Pro, the bezels are also quite large and look a little old fashioned. To be honest, the MobileStudio Pro 13 was built to compete more with the Apple MacBook Pro 15 than the iPad.

Even then, the case feels pretty ergonomic, and fits very nicely into the palm, thanks to the rounded edges.

Connectivity – The connectivity is also very good on the MobileStudio Pro 13. While it conspicuously lacks a USB-A port, it has 3 USB-C ports. The middle can be used to connect it to a computer, and there is also a headphone jack and an SD card reader. You could also buy the optional Wacom Link, which allows for a connection to a desktop without USB-C ports.

Extras – This tablet also has cameras on the front and rear. These aren’t the same cutting edge kind you find on the latest phones. They’re more for scanning documents and making conference calls. The great win here is the RealSense 3D model scanning camera, which you can use to create 3D objects.

Performance – The Wacom MobileStudio Pro 13 uses a Core i7 6567U, which dates back to September 2017. That makes it a little outdated compared to the quad-core and hexa-core Core-i7 processors of today. That said, it’s still sufficiently powerful for most of the tasks you’ll throw at it. Thanks to Intel Turbo Boost, the processor can operate at a frequency as high as 3.6 GHz. It cannot compete with modern multi-threaded processors with more cores, but it doesn’t throttle at high loads, which is great.

Power – Battery life is something that Wacom could improve on, not just with the MobileStudio Pro 13, but with many other products of theirs as well. Provided you don’t subject the tablet to heavy use, the battery should be able to last up to 6 hours before needing a recharge. However, under normal use, you should expect 3 hours of battery life on average. You can thank the high end hardware for that. You also shouldn’t charge it with a mobile phone USB-C charger. Only the big one that comes with it

The biggest selling point for this pen tablet has to be its screen/stylus interface by far. Wacom has always had a great reputation for building great interfaces along these lines, and their place as a market leader is a testament to that fact. They brought us graphics tablets to do fine artwork so we wouldn’t have to use trackpads and mice, and we’ve never looked back as artists since.

The use of a screen with a pen allows you to connect directly with your art and  acquire fine manipulation capabilities while working with your computer, something you will not get with a trackpad or mouse.

Moreover, working with a pen and screen allows you to build the right kind of motor memory. Wherever you place your pen will have the same kind of proportionality relationship with the screen’s dimensions, no matter what. It’s not quite the same with a mouse and trackpad, since you will likely spend some seconds looking at the screen and moving the cursor to get some sense of position before you can start. With a screen and pen, you place the stylus on the screen and you can start right away.

This particular Wacom comes with a Wacom Pro Pen 2, which supports 8192 levels of pressure, as well as pixel level pointing accuracy and tilt sensitivity. You can draw thin and thick lines with equal ease when working with a pen with tilt sensitivity. All this comes as a result of Wacom’s proprietary digitizer, which works much better than most others in the industry.

Another great thing about the pen on the Wacom Pro is that it doesn’t need batteries to work. You can work with it endlessly, without having to stop to recharge.

The pen also comes with 2 buttons on the side, as well as an eraser. The buttons can be customized, but you’ll need to make sure the pen is within an inch of the screen for the buttons to work.

The pen also includes spare nibs if the one that comes with the pen starts to wear out. We also love how comfortable the pen is to hold, and how well balanced the weight is.

Using this pen feels very intuitive and easy. The display is very close to the surface so that putting the pen to the screen feels like you’re touching the pixels directly. Sure, there’s a thin layer between the pixels and the top layer, but it does feel like you’re working directly on the user interface.

The pen is also insanely accurate. It has pixel level positioning accuracy, making it super accurate to a pixel. The sensitivity is also great, with the touch screen showing the pointer as soon as the pen tip is within an inch of the screen.

The exterior of the screen is matte, which is better than the glassy screens you see on devices like the iPad Pro. It doesn’t have glare and reduces the problem of fingerprint grease that glassy screens have. The matte screen  also flexes ever so subtly when you apply pressure to it. That’s not a durability issue, like it might seem. In fact, the more bendable a screen, the less breakable it is, and the more durable for art applications.

As you can see, it certainly isn’t cheap. You’ll also need to pay an extra $70 for the Wacom Link to plug your tablet to a desktop computer. However, considering all the perks, the price is certainly worth it.

Can you use the Wacom MobileStudio Pro with a computer?

Yes. You can easily do that with either the optional Wacom Link adaptor or a USB-C connection. This allows you to use it like a normal pen and touch input device for your desktop computer.

The Huion Kamvas Studio is significantly cheaper than even the cheapest MobileStudio Pro 13 model. It comes with a 22-inch screen, which is significantly larger, the same pen pressure, multiple connectivity, including VGA, DVI, HDMI, and USB, making it easy to connect it to any desktop. That said, it has a weaker Core i5 processor, lower resolution, and significantly weaker specs. However, it is a great tablet for serious artists who need something lower budget.

We have a full review here

The biggest win for the HP Zbook X2-G4 over the MobileStudio Pro 13 is that it comes with the latest generation Core i7 processor, complete with 4 cores. It also comes with an NVIDIA Quadro M620 2GB dedicated GPU, and multiple SSD size options. That said, the screen isn’t the same high quality matte display of the MobileStudio Pro 13, and it doesn’t come with a pen out of the box. You’d have to buy a compatible stylus separately.

The Apple iPad Pro, while infamous for its own high price, is still cheaper than the MobileStudio Pro 13. However, it doesn’t have nearly as much power or capabilities. This tablet is better suited to low load activities and entertainment uses, rather than demanding artwork.

And with that, we come to the end of our review of the Wacom MobileStudio Pro 13. As you can see, it’s jam packed with features and high quality parts. It’s definitely built for serious professionals and hobbyists.

The only downside is the forbidding price, though it’s worth it when you consider what you’re getting as part of the package. Until next time, happy drawing!